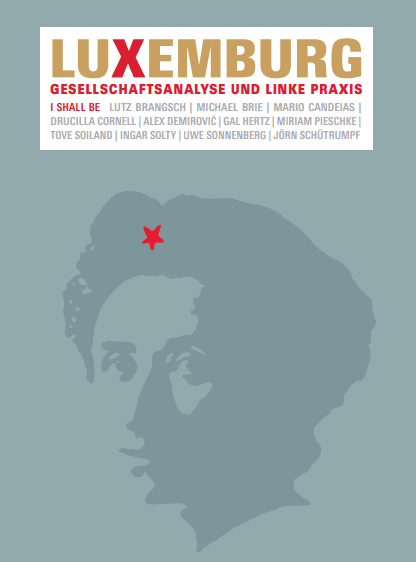 Rosa Luxemburg is one of the iconic faces of the socialist movement. She is also one of the few women, possibly the only women, whose key role in the movement is unquestioned. She continues to impress us to this day as a brilliant author and clear-sighted theoretician; she was an inspirational speaker, artistic chronicler and passionate comrade. Rosa Luxemburg represents a stance that brings together resolute dedication to political struggle and ‘tender humanity’. Luxemburg is not only the eponym of the Rosa-Luxemburg-Stiftung, but also the inspiration for this journal. Her unique way of combining theory and practice, analysis and transformation, strategy and active intervention in her life is what the LuXemburg Magazine aspires to, as the mouthpiece of a left-wing project for society. 100 years after her murder, almost everybody today knows who Luxemburg was, and many are familiar with her dictums. However, even among the Left, few people actually study her writings more than superficially, and hardly any courses focus on her works, which are rarely discussed in detail. Some of her quotes, such as ‘the freedom of those who think differently’ have made it into the political mainstream, and have been expropriated and re-interpreted as anti-socialist slogans. With this anniversary issue, we hope to revive Luxemburg’s thinking and political action. What can she offer in the face of today’s challenges? In the struggle against the right-wing, the deep crisis of the political and the great weakness of the Left? How did Luxemburg conceive of the relationship between party and movement? What did she make of internationalism? Was she a feminist – or how can we, as left-wing feminists, refer to her? Many today continue to wear themselves out haggling over small political differences, as well as in large and significant struggles. What stance did Luxemburg take when confronted by such challenges? How did she deal with the paradox of reform and revolution? And what can we learn from her on the decisive question of political organisation? We follow her firm conviction that our society can and must change – and her optimism that a future of radical emancipation is possible, even in the face of political defeats: I was, I am, I SHALL BE! Download LuXemburg Magazine "Ishall be" With the exception of the articles by Rosa Luxemburg and Drucilla Cornell, this brochure, a compilation of texts from the 3/2018 ICH WERDE SEIN issue of the LuXemburg Magazine, has been translated from German by Tim Jack, Phillipa Hare and Sally MacPhail for lingua•trans•fair

Alex Demirović
Feminism in Nigeria – By and for who?