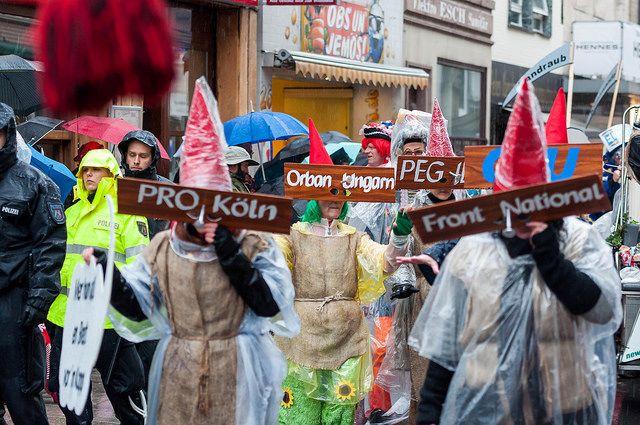 Reflections on the Hungarian Election

The results of Hungary’s April 8 elections were the product of a complex process encompassing institutional elements, the fragmented state of the political opposition, the ongoing campaign against refugees, and the delegitimization of democracy against the backdrop of capitalist transformation in Eastern Europe. Hungary’s electoral laws were amended by the previous Orbán government in 2012, mixing direct elections in individual constituencies and a proportional system elected through party lists with a compensation system by which the votes of direct elections are added to the list vote according to a predefined key.[1]
Von Attilla Melegh

This makes the direct election exceedingly important. 106 seats are elected via direct, simple majority vote in the constituencies, while 93 seats are determined over the list vote. A 5% threshold remains in place for party lists, raised to a 10% threshold for joint lists should two parties choose to establish a common platform. There is only one extra member for minorities. Ultimately, the ruling FIEDSZ party won  49,60% of the list votes, along with 91 of 106 constituencies, and thus achieved a two-thirds majority in parliament.

Smaller parties should have merged with larger parties in order to clarify the front lines for voters. On the whole, coordination between opposition parties has been very weak in recent years. A common electoral list was established between the Hungarian Socialist Party (MSZP) and the green/democratic-oriented Dialogue for Hungary (PM). The latter’s candidate for Prime Minister, Gergely Karásony, was able to provide the weakened party with a modicum of fresh momentum. Both parties cooperated with the Democratic Coalition (DK) in individual districts by withdrawing candidates with low chances of success. A very small party, TOGETHER (Együtt), also supported this cooperation in some districts. Another small party called POLITICS CAN BE DIFFERENT (LMP ), Momentum (which emerged out of the anti-Olympics movement in 2017) and the nationalist JOBBIK basically competed alone with only minor degrees of coordination. In sheer mathematical terms, it should have been clear that such a divided opposition could not win a substantial number of seats in individual constituencies. Voters thus had to decide what to do individually, following advice circulated online on how to vote against FIDESZ while the various parties kept their candidates in the electoral running. This led to a situation in which the ruling party simply waited out the fracas while arguing that the opposition was chaotic and hopeless. That said, the political divisions of course deserve deeper analysis in order to explain why a higher degree of cooperation failed to materialize. Over the last ten years, Hungary’s democratic political institutions have been weakened, while the media landscape has been largely taken over by government-friendly corporations and independent and critical reporting has been marginalized.. Opposition forces have sought to roll back some of these changes but have enjoyed little success, while the notion of open and democratic debates seems to be on the decline in the country. This state of affairs was reflected in the fact that Prime Minister Orbán refused to take part in any debates, leaving just a few, marginal debates between opposition and government politicians. Political life is deeply polarized, divided into two historical and political blocs: the nationalist and the left-liberal blocs. The nationalist bloc is hegemonic and determines the political terrain. FIDESZ, an oligarchic, anti-EU and “anti-migration” party has been the defining force since the late 2000s. Utilizing the electoral system it introduced which excessively favours the winner, it has come to dominate the entire political field and won a two-thirds majority despite winning less than 50% of the vote. The governing party has moved further to the right and in doing so strengthened its grip on the media and democratic institutions. FIDESZ has only one major political competitor: JOBBIK, which has moved in the opposite direction away from the extreme right wing, and attempted to cultivate a more moderate image. These nationalist parties have focused on similar topics and social groups (ethnic and cultural homogeneity, national protectionism). Since the early 2010s, JOBBIK has focused on corruption and the anti-democratic manoeuvres of FIDESZ, becoming a serious contender within the nationalist bloc and making great efforts to delegitimize the position of FIDESZ and eventually overtake it. This fight has become one of the key axes in Hungarian politics. JOBBIK received 19,19% of the vote, or 26 seats, a slight decline compared to the last elections. Two smaller parties, Politics Can Be Different (LMP) and Momentum, joined JOBBIK in attacking both FIDESZ and the left-liberal opposition bloc led by the Hungarian Socialist Party (MSZP) and Democratic Coalition (DK), depicting them as representatives of the “old regime” which collapsed during the 2008-9 economic crisis when the nationalist bloc first emerged as a hegemonic force. This tactic ultimately led to an overall weakening of the left-liberal block, which overall lost votes. The MSZP lost over half of its votes and received only 11,99  % and 20 seats, placing third after JOBBIK. The DK, a, received 5,41% and nine seats. The LMP was able to improve its result slightly to 7,10% and eight seats s. TOGETHER (Eygütt) also received one seat. Despite strong overlaps between the parties’ programmes, the opposition as a whole was not able to formulate a connective politics. The Hungarian Two-Tailed Dog Party, a minor satirical party, launched a campaign to parody the political arena and proved, if nothing else, refreshing.

The fragmented opposition is of course only one element of FIDESZ’s success. A further element is surely its successful campaign against immigration and globalization, with which it has shaped a political discourse primarily targeting the lower classes in rural areas. This discourse of “national control”, peppered with a previously unknown level of racist vocabulary and anti-democratic discourse, has proven quite seductive even if it is unable to actually solve contemporary problems and challenges. The left-liberal bloc was neither able to establish different themes nor articulate an alternative narrative in response. Hungary is the paramount example of an Eastern European country in which the left has failed to establish a strong political bloc and develop an effective critique of global capitalism and its transnational institutions while simultaneously articulating an anti-racist, solidary and emancipatory alternative. A particular challenge in this process is the development of a social and solidary society of immigration in order to counter the fear of the so-called “migration crisis” which has served as the motor of a new right-wing authoritarianism (and by no means only in Hungary). Without such a development, the left-behind popular classes of Eastern Europe will continue to lend their support to manipulative elites and their passive revolutions – edging towards a nationalistic and authoritarian management of global capitalism.

[1] The votes “not needed” for the constituency vote, so to speak, are attributed to the nationwide party lists as “fraction votes”. A hypothetical scenario to illustrate the system: in one constituency, 40,000 voters favoured Candidate A, while 20,000 went for Candidate B. A receives the constituency seat. The 20,000 votes for the losing Candidate B are attributed to his Party BBB, while Party AAA receives the difference (-1) with which she won the constituency seat, that is to say 40,000 - 20,000 - 1 = 19,999. Had the difference between the two candidates been only ten votes, then Party AAA would receive only nine votes.

Attila Melegh is senior researcher at Demographic Research Institute, Budapest and lecturer at Corvinus University of Budapest. He also lectures in a teaching excellence program in Russia and has done so before in Russia and Georgia. His current research covers comparative demographic attitudes, discourses, demographic structures, international migration and global social change.
Marco Verch/flickr

Miriam Pieschke
"I shall be"