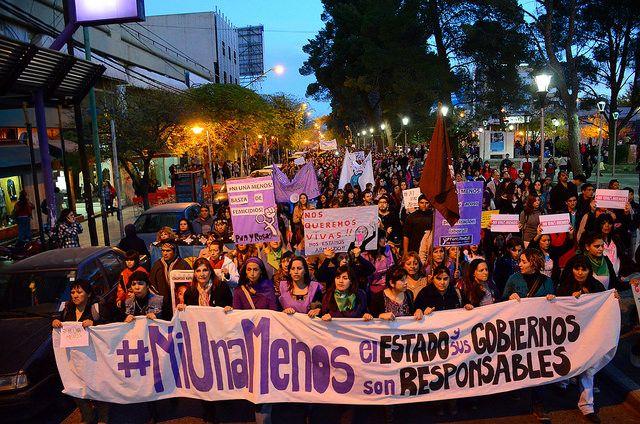 Interview about femicide and its political meaning

Alex, you are actively involved with the platform »Keine Mehr« (Not One Less), whose aim is to bring the femicide debate to Germany. Why are you using the term femicide instead of talking about individual murders of women?

Instead, the term is intended to make certain murders of women visible as a form of hate crime and to draw attention to the social context. On the one hand, this means understanding femicide as an extreme expression of unequal gender relations and a male desire to dominate. Numerous studies and reports have shown that the risk for women to be exposed to violence rises particularly when traditional gender arrangements are shifting – especially during and after a separation or divorce. A murder is the culmination of this violence. For this reason, researchers also talk about revenge for wounded macho pride. At the same time we need to ask which social conditions permit such acts to take place at all. Talking about femicides not only makes these killings of women visible, but also helps to mobilise political opposition.

At the moment, violence against women is discussed in public primarily when the perpetrators are migrants and refugees. Can a broad discourse on femicides help to counter this racist instrumentalization?

Racist instrumentalization of sexual violences are on the rise at the moment, but they are not a new phenomenon. During colonialism and in the Nazi era, the imagery of the violent, intrusive foreigner was used to legitimise one’s own violence. It’s easy to re-activate this cultural memory. We saw this in the debate about ›honour killings‹ in Muslim families, which have received far more public attention than killings in German families and relationships, although differentiating between the two is not always easy. The construct of the ›other‹, of course, always serves to create the construct of the ›self‹ – in this case an apparently progressive German majority into which the ›others‹ are unable to integrate themselves. The same thing is happening again now. Last December, when the German news programmes reported  the murder of a 15-year-old girl by her Afghan ex-boyfriend and labelled it a ›relationship crime‹, and therefore as something outside the public interest, there was a huge public outcry. Unfortunately, however, this is a standard label within the German media. The concept of femicide is a very helpful and important feminist intervention here because it does not trivialize or belittle the act. After all, we don’t want people to stop talking about murders carried out in the name of supposed honour. Instead, the aim is to elevate all so-called relationship crimes to an issue of public interest. If we manage to make the patriarchal structures visible that are supporting these crimes, we can also counter a racist instrumentalization of the issue. Because projecting sexual violence on the ›other‹, the foreigner, also serves the whitewhasing of your own society. Once you have established the notion that femicides are a structural problem that permeats our society this is no longer possible.

The name of your platform – »Keine Mehr« – references the »Ni una menos« movement in Argentina, where hundreds of thousands of women have been demonstrating since 2015 against femicide and patriarchal violence. What opportunities do you see for such feminist mobilization in Germany?

›Ni una menos‹ represents a qualitative leap in raising awareness of femicide as an issue, and now joins together a large number of anti-patriarchal demands. However, this mass movement did not happen out of the blue but builds on decades of mobilizing and numerous debates. In Germany, we do not have these preconditions. The women’s movement here has achieved a huge amount, but at the same time there is the myth that gender equality is already a reality. In addition, the institutional integration of large sections of the women’s movement has often led to their demise as an active social movement and made independent mobilization efforts harder. This has only been changing in the past few years. We have seen a new strength of the movements against sexual violence and harassment and for sexual liberty, but there is still little awareness that extreme acts like femicide occur here in Germany, too. Last year alone, 147 women were killed by their current or former partners. In addition, there were 224 known cases of attempted murder in relationships and the actual figure is probably higher because many murder attempts are not reported. This means that a femicide attempt takes place almost every day – and that’s just the ones within intimate relationships. Moreover, there is a lack of valid data. Against this background, our primary aim at Keine Mehr is to collate and disseminate knowledge. We want to raise awareness and disrupt the silence around these issues in Germany. This is why we decided to start with a conference on the topic instead of calling for a demonstration immediately.

What were the results of your conference? And what are the aims and demands of the Keine Mehr platform now?

The conference took place in November 2017 and was split into three parts. In the first part, the independently run women’s refuges in Germany (Autonome Frauenhäuser) presented the available figures on femicides and highlighted the gaps in the data. It became clear that more data and more sophisticated analyses are needed for Germany, ideally by an independent research institute. In the second part, Gender Equality Media presented the media coverage of femicides, which has a powerful influence on the public understanding of the problem. Killings of women are still trivialized by terms like ›family tragedy‹ and ›crime of jealousy‹. This triggered our idea to produce guidelines on sensitive reporting and a dedicated image database. Regarding the fact that many Latin American countries have already made femicide a separate statutory offence, the third part of our conference focused on the legislation and juridical practice in Germany. The existing paragraphs on murder in the German penal code require a global assessment of all the circumstances leading to the crime, including the intentions of the accused. So the judges are to decide whether an act was committed out of anger, aggression or despair and which category of murder they chose. This shows even more strongly the need to raise the general awareness of sexist violence against women and femicides. The judicial personnel must be reached this way too. A call for training would probably not achieve anything because the judiciary is independent and would not follow it. There is a blog summarizing all the results of the conference, which also serves as a database and provides ideas for multipliers and the interested public.

What does all this imply for feminist organizing and mobilization? In Argentina and Spain, for instance, there have been successful women’s strikes; do you think this is possible in Germany?

Mobilization around violence against women is frequently accused of feeding into the image of women as victims, as passive and helpless. And yes, there is sometimes a point in that. A strike is a great method to break out of this mould. It is a way of actively protesting against the conditions that facilitate violence and femicide and these also include economic conditions. This is why Keine Mehr has joined other voices in calling for a strike in Germany on 8 March 2019. But of course, we have a different feminist movement and level of mobilization in Germany than in Argentina – and also a different strike culture and history. However, the power and success of the strike movements in Spain and Argentina have inspired and empowered many women in Germany. So we can see a South-North-transfer of organizing experiences. This will of course be a long process, but we think and hope it will be unstoppable.

The interview was conducted by Lukas Hoffmann. Translated by Ros Mendy and Sally McPhail (lingua•trans•fair)