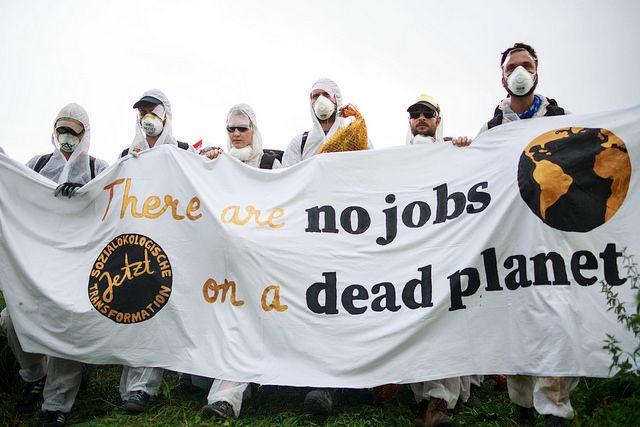 The Historical Contradiction between Ecology and Emanicipation [1]

Ecology and the emancipation of the working class are, considered in a historical sense, a contradiction. Or at least, that’s the case for the Global North.  Local struggles for social and political rights, as Timothy Mitchelll (2011) demonstrates in his book Carbon Democracy, considerably profited from the fact that in the late 19th and early 20th Centuries, coal as an energy source began to play a prominent role economically.
Von Bernd Röttger und Markus Wissen

Coal was extracted from central deposits and transported to its place of destination through infrastructure such as railways and canals.  Both the deposits as well as the infrastructure were highly vulnerable to labor struggles.  Strikes in large workplaces by workers who were crammed together and thus easily able to organize, could paralyze an entire energy system.  The energy source coal – the burning of which, as we now know, is significantly responsible for climate change – constituted at the same time the material basis for increasing the organizational and structural power of the working class. Workers used their increased power in order to fight for political and social rights to an unprecedented extent. The historical compromise between labor and capital in the Global North – the acceptance in principle of the capitalist mode of production by the working class under the precondition of being able to share in the increased prosperity (or “social wealth”, as Marx called it) made possible by this mode of production and, within the framework of liberal democracy, being able to participate more strongly in politics – has to that extent a social-ecological downside:  it is based upon the destruction of nature as well as the externalization of the consequences of this destruction in space and time: in space, because the carbon sinks that absorb the CO2 released in the Global North by burning fossil fuels are primarily located in the Global South (for example, in the form of large rain forests); in time, because CO2 emissions, due to their sheer magnitude, overload the absorption capacity of earth’s carbon sinks, so these emissions concentrate in the atmosphere and cause the climate change noticeable today and in the future. With the increased importance of petroleum to advanced capitalist accumulation, the close connection between fossil fuels and social and political rights was weakened on the one hand, since the extraction and transport of oil is more capital-intensive than in the case of coal, and furthermore takes place via a network of locations, pipelines, and tanker fleets that is far less susceptible to targeted labor struggles than the centralized infrastructure of coal extraction and distribution. On the other hand, in many states of the Global North, the automobile industry ascended to the status of a key economic sector.  The oil-fueled automobile went from being a luxury product to a mass product.  It revolutionized the way of life for wage laborers, became the symbol of prosperity, constituted (male) identities and granted the working class new resources of power in initially strongly vertically integrated manufacturing.  The ecological problem essentially remained the same.  Fossil automobility is, similar to the coal-based generation of power and warmth, a significant driver of climate change.  The structural and organizational power of the working class, which arose out of the automobilization of developed society under Fordism, was based upon ecological destruction as well as the oppression of democratic movements (in oil-producing countries for example by an alliance between political Islam and US imperialism). In large parts of the Global North, coal mining is less important today, the infrastructure tailor-made for it is partially devalued. At the moment, the automobile industry is sliding further into crisis.  However, notions of an attractive life connected to coal and later petroleum and the automobile, and the social compromises necessary to their realization, continue to have an effect.  They are deeply rooted in everyday perceptions and practices, the social balance of forces, as well as state institutions and apparatuses.  That is demonstrated in Germany not least by the manner in which the labor union IG Bergbau, Chemie, Energie – in close cooperation with the ministry of economics of participating German states – defends still-existing lignite opencast mines against closing them for urgent social-ecological reasons.  And it is also demonstrated by the current crisis of the automobile industry, in which corporations, the state, and to some extent labor unions combat the fundamental transformation of an ultimately imperial – because based upon the disproportional appropriation of nature and labor-power (elsewhere) – form of mobility, albeit one that in the meantime is being increasingly converted to electric power. So the connection between the ecological question and the question of class appears to take shape in a way that one can only be solved at the cost of the other. And, considered historically, it was ecology that was trampled underfoot, to the extent that the social and political emancipation of the working class was consummated and also mediated by an intensified domination of nature: an increased use of resources and an overstraining of carbon sinks.  Today, however, both are threatened with being trampled underfoot.  Capital production sets out, as Marx notes in Capital, to undermine “the original sources of all wealth – the soil and the worker.” (Capital I, p. 638) The historical contradiction between ecology and the emancipation of subalterns thus does not necessarily rest upon a systematic one.  The situation in many parts of the Global South has always presented itself differently.  There, ecological destruction often does not serve social and political emancipation, but rather prevents it and intensifies asymmetries of class and gender relations.  Conversely, social rights, which shape access to and control over land and resources in a more egalitarian way, not only constitute emancipatory end in themselves, but are also the key to a more reflexive handling of nature.  Ecology and emancipation can therefore indeed stand in a co-constitutive relation to each other, rather than a contradictory one. From a left perspective, in light of the destructive consequences of an “imperial mode of living” (Brand/Wissen 2017, 2018), it’s indispensable to identify the points of contact between ecology and emancipation and closely determine the contours of an ecological class politics (which we understand to be a constitutive component of a “new class politics”; see Brie/Candeias 2016).  This presupposes disentangling the class question from its social democratic restriction to the participation by wage laborers in the fruits of economic growth, without therefore giving up the level of social and political rights already achieved in the Global North.

On the “Family Resemblance” between Social and Ecological Movements

[1]     The authors hereby thank the members of the discussion group on the “Future of the Automobile Industry” of the Rosa-Luxemburg-Stiftung for suggestions and criticisms. [2]     In the 19th and early 20th century, the ecological question was already a class question, to the extent that workers felt the ecological and health consequences of industrialization in their workplaces and neighborhoods more strongly than members of the middle and upper classes.