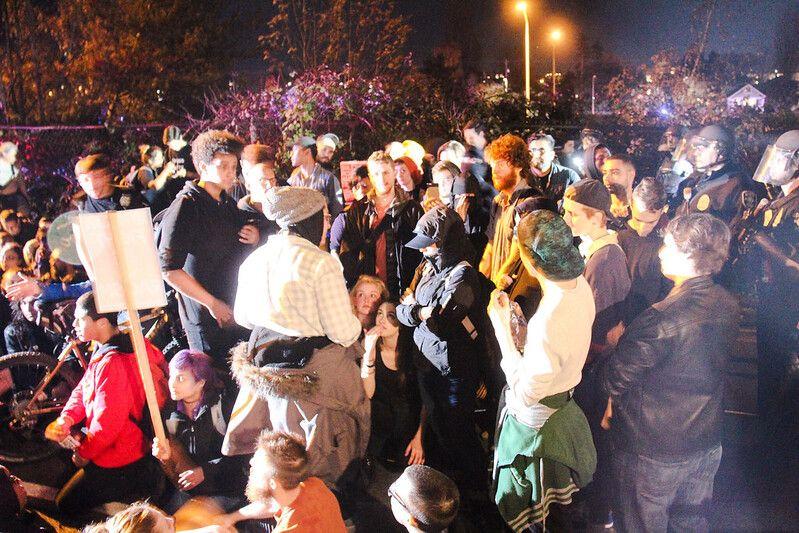 How Do You Institutionalise a Swarm?

For French Philosopher Alain Badiou, an event is a break, a moment of rupture with a clear ‘before’ and ‘after’, where the ‘after’ could not be foreseen even from within the event itself, and whose meaning is primarily ascribed in retrospect. ‘Seattle’ was an event in this sense, creating an unexpected disruption within an apparently hegemonic, imperial structure by a newly emergent, multitudinous, antagonistic social subject. This was a subject which, later, would have many names, but was best described with the French term mouvement altermondialiste – the movement for a different globalisation.

The promise of Seattle

But the significance of Seattle lay not simply in the fact that a new social subject had emerged, had had its ‘coming out party’, but also in how this new subject was composed, how it moved, how it fought. The Seattle protests, it was widely remarked, bore the characteristics of a swarm: a seemingly chaotic ensemble that self-organises in real-time; disparate, dynamic and rhizomatic in structure. What better way to explain the success of this ephemeral convergence of tens of thousands of protesters – trade unionists and environmentalists, anarchists and communists, nuns and queers – around the Third Ministerial of the WTO? In many ways, the swarm was one of the defining characteristics of the early days of the alterglobalisation movement, and not just its counter-summit mobilisations. By 1997, the term had already been used to describe the social movement- and civil society-convergence on Chiapas following the Zapatista uprising in 1994. The campaign against the Multilateral Agreement on Investment, successfully defeated in 1998, took many by surprise when it managed to mobilise across national, linguistic and other barriers without relying on a centralised or centralising structure. The traditional institutions of the left played a relatively minor role in the early days of the movement against neoliberal globalisation. It was the heterogeneous composition of the movement, it’s ability to communicate and coordinate across different kinds of borders, and to converge (swarm) around both spaces and issues that constituted the promise of Seattle. However, contrary to what was often argued at the time, the tactical and strategic deployment of the ‘swarm’ was not necessarily motivated by a strong ethico-political commitment to independence from organisations per se. The movement’s initial anti-institutionalism should rather be understood as arising from a specific historical conjuncture within which few other strategies made sense. The alterglobalisation movement emerged in the context of a well-established neoliberal hegemony. At the turn of the century, neoliberalism had a firm hold even over ‘progressive’ forces: many social democratic parties, trade unions and development NGOs had accepted the dictum that there was no alternative. As a result, there was little room for manoeuvre within these institutions, and few opportunities for fruitful collaboration with them for a movement that loudly proclaimed that other worlds were possible.

The promise of today

Today, the world has changed. Not only is neoliberalism in a deep ideological as well as material crisis, but there are indeed numerous alternatives, visible on different levels and scales. A ‘Pink Tide’ has swept across Latin America, breaking with the policies of the Washington Consensus, and the alterglobalisation movements themselves have started to ask the question: how to institutionalise a swarm? In other words, how can (more) permanent form be given to the diverse struggles of the movement? How can counter-power be built without sacrificing that which can be won by anti-power? What would it take to make a multitude, ‘an internally heterogeneous social subject that is capable of political action’ (Hardt and Virno: 2009)? Among the most ambitious attempts to offer answers to these questions have been the Zapatistas’ Caracoles and Juntas de Buen Gobierno, and the World Social Forum (as well as its manifestations at other levels). Moreover, there is today an increasing acceptance within the global movements of rather more complex relations between movements and institutions (including political parties both in power and opposition), not reducible to simple exteriority. The relationships between the Movimento Sem Terra and Lula’s Worker’s Party in Brazil, between (post-)autonomous social movements in Germany and DIE LINKE, and even between radical labour and anti-war activists in the US and the Obama administration, are of course very different. Each of them, however, has been characterised by the following. On behalf of those ‘constituted’ forms of power: a recognition that there are limits to the degree of change that can be achieved on the level of representational politics alone. And on the behalf of movements: that there is little to be gained from indifference towards electoral politics, and that their role is to try and keep open the ‘constitutive’ moment for as long as possible. By constitutive, we mean the combined practices of both disassemblage and creation that produce the new logics and laws by which we live. The alterglobalisation movement has always experimented with radical forms of democracy, its job today is to take this a step further with the creation of (open and ephemeral) institutions. But it will also depend on developing a way of relating to ‘constituted’ forms of institutional power that force them open for constituent processes. Perhaps such a relationship can be founded on the strategy of directional demands. These are demands that encapsulate collective human needs and desires, and which emerge out of constituent processes. Examples would be the demand for a guaranteed basic income de-coupled from the requirement to produce for capital, or the right to global citizenship, or for ‘climate justice’. Each of these demands, if won, would carry closer the promise of making another world possible. Of course, there would be no monopoly on whom could place these demands, how many there could be, their content, or how they should be articulated. Maybe it is partly on the more cacophonous than symphonious practice of articulating such demands that the institution of the swarm is to be founded.

Tadzio Müller is a precarious political scientist and writer in Berlin. He is a co-editor of the journal Turbulence: Ideas for movement (www.turbulence.org.uk) and author, along with Stefan Kaufmann, of Grüner Kapitalismus. Krise, Klima, Wachstumswahn (Berlin: Dietz Verlag). He is active, within the international Climate Justice Action network, in the mobilisation to this year’s Climate Conference in Copenhagen. His political and research foci are, on the one hand, the ‘Green New Deal’ and other projects of green capitalist modernisation, and on the other (the movement for) climate justice.

Ben Trott is a PhD candidate at the Freie Universitaet Berlin. He is an editor of Turbulence: Ideas for movement (www.turbulence.org.uk) and was on the Board of Editors of the eight volume International Encyclopedia of Revolution and Protest: 1500 - Present (2009). In 2007, he co-edited a special issue (7.1) of the journal ephemera: theory and politics in organization on immaterial and affective labour. He is a semi-regular contributor to the Guardian newspaper's ‘Comment is Free’ pages, and co-editor of wir sind ueberall: weltweit. unwiderstehlich. antikapitalistisch. (2007) as well as Shut Them Down!: The G8, Gleneagles 2005 and the Movement of Movements (2005).

Note: This article draws on some of the ideas developed in Life in Limbo?, published in Turbulence: Ideas for Movement 5.